Full cast announced for the world première of APPROACHING EMPTY 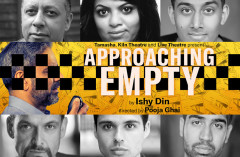 ‘Forget friendship… this is business.’

In a scruffy minicab office, Mansha decides it’s time to create his own destiny and offers to buy a business from his lifelong friend Raf. As the realities of the state of the business slowly unravel, these two best friends must confront the difficulties of going into business with those closest to them.

Ishy Din’s theatre work includes Snookered (Tamasha, Oldham Coliseum and Bush Theatre) and Beats North (Edinburgh Fringe). He was the 2012 Pearson Writer in Residence at the Manchester Royal Exchange and in 2013 Snookered won Best New Play at the Manchester Theatre Awards. For television, his work includes Ackley Bridge, Taxi Tales and Doughnuts; for film, Fraud, Perfume and Our Lad; and for radio John Barnes Saved My Life.

Karan Gill plays Shazad. His theatre credits include The Lovely Bones, Child of the Divide (UK tour), The Captive Queen and That the Eye of Heaven Visits (Shakespeare’s Globe); and for film, Boogieman.

Maanuv Thiara plays Tany. His theatre credits include King Lear (Bristol Old Vic), Hamlet (Almeida Theatre), and A Passage to India (Park Theatre); and for television, Hamlet and The Boy with the Topknot.

Pooja Ghai directs. She was the Associate Director at Theatre Royal Stratford East where she directed Rapunzel, Counting Stars, The House of In Between, Home Theatre and Angelic Tales. Other theatre credits as director include Lions and Tigers (Sam Wanamaker Playhouse), The Empress (The Embassy Theatre), Vestige for Wayne Parsons Dance (Wilton's Music Hall/ Rich Mix/ 2018 tour), Tamasha 25, Shakti & Seva, Mother India (Rich Mix), 13 (Corbett Theatre), As You Like It (Ellen Terry Theatre), The Accordian Shop (Curve), The Tune is Always Better on the Outside, Oysters, Mirad a boy from Bosnia (The Bedford) and The Difference (Soho Theatre). Theatre credits as an associate /assistant director include The Infidel The Musical (Theatre Royal Stratford East) and The Memory of Water (UK tour).