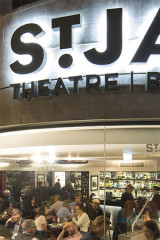 Announcing the UK & european premiere of Rex Pickett's acclaimed comedy SIDEWAYS directed by david grindley running at the St James Theatre for a limited run from 26 may ­ 9 july 2016.

A brand new production of Rex Pickett’s critically acclaimed and much loved novel and play Sideways will open at the St James Theatre for its UK and European premiere, directed by David Grindley (Daytona, Journey's End, The American Plan). Sideways has a limited run from 26 May until 9 July, with press night on 31 May and the full cast and creative team will be announced in due course.

If anyone orders Merlot, I'm leaving!

Join best friends Miles and Jack on a hilarious journey into the heart of wine country with Sideways: The Play. Based on his beloved novel, which inspired the Academy Award and Golden Globe winning film, Rex Pickett's stage adaptation fizzes with comedy and heartfelt emotion, and goes down better than a well-aged Pinot Noir.

When a neurotic author, who is writing his way into a midlife-crisis, and an actor, who is marrying his way out of his, head out to Santa Barbara for a week of wine-tastings, they find out that there's more to be savoured in California than a few new bottles. For when Miles and Jack meet the equally strong and complex Maya and Terra, the four of them learn just how intoxicating a good glass of wine and good company can be - for better and for worse.

Rex Pickett said, “From the moment my play Sideways was successfully staged in the U.S. it's been my express dream to bring it to London. That is not hyperbole. I've been a lifelong, die-hard fan of U.K. films, literature, thespians, and, of course, London's rich history of theatre and her undying love of language and for the spoken word. The Brit influence on my work is incalculable, my debt enormous. Bringing Sideways to London is that dream realized in Technicolor, that debt remunerated in the only way I'm capable of expressing my immeasurable gratitude."

Rex Pickett (Writer) is the author of the novel Sideways, upon which the Oscar-winning Alexander Payne film of the same name was adapted. His writing career ranges from indie filmmaking, screen and TV, novels and playwriting. Sideways (the play) was first performed at the Equity-waiver Ruskin Group Theater in Santa Monica, California, where it ran for 6 months. It transferred to the 400-seat Potiker Theater at the La Jolla Playhouse where it broke all attendance records for a non-musical in their 35-year history. A graduate of the University of California at San Diego, Rex's papers and films are archived in Special Collections at UCSD's Geisel Library.

David Grindley’s (Director) credits include The Gigli Concert at the Gate Theatre, Dublin which was nominated for Best Production 2016 in the Irish Times Theatre Awards, Kafka’s Dick and A Steady Rain, both at the Theatre Royal, Bath, Outings at the Edinburgh Festival, Pygmalion on UK Tour, Daytona at the Theatre Royal Haymarket, Park Theatre, and on UK Tour, The American Plan at the Theatre Royal, Bath and St James Theatre, Our Boy at the Duchess Theatre, Enron at the Galaxy Theatre in Tokyo, Japan, Copenhagen at The Crucible Theatre, Sheffield, The Misanthrope and A Midsummer Night’s Dream at the Stratford Shakespeare Festival, Canada, Journey’s End on UK Tour and Duke of Yorks Theatre, Jeffrey Bernard is Unwell on UK Tour, Six Degrees of Separation and National Anthems, both at the Old Vic, The Philanthropist and Pygmalion, both at the American Airlines Theater, Broadway, Blackbird on the UK Tour, Journey’s End at the Belasco Theater, Broadway which was the winner of the 2007 Tony Award of Best Revival of a Play, In The Club at Hampstead Theatre and on UK Tour, Honour at the Wyndhams Theatre, The Philanthropist at the Donmar Warehouse, What The Butler Saw at Hampstead Theatre and the Criterion Theatre, Some Girls at the Gielgud Theatre, Journey’s End at the Comedy Theatre and on UK Tour, Abigail’s Party at Hampstead Theatre, the Ambassadors Theatre and UK Tour, Loot at the Minerva Theatre, Chichester and Vaudeville Theatre, Single Spies on UK Tour, Richard III at the Mercury Theatre, Colchester and The League of Gentlemen at Canal Café Theatre.

Sideways is produced by Matt Chisling and Amy Anzel for Pinot Productions Limited.