by Best of Theatre Staff on Tuesday 4 September 2018, 11:25 am in Cast Changes and Announcements 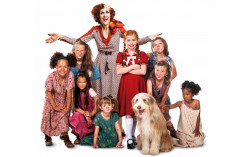 Michael Harrison and David Ian are delighted to announce that Anita Dobson and Craig Revel Horwood will star as ‘Miss Hannigan’ in the forthcoming UK tour of their smash hit production of the musical “ANNIE” opening at the Manchester Opera House on Saturday 2 February 2019.

This production recently ran for an extended season in the West End following a sell-out tour of the UK and Ireland in 2015/16 as well as a recent sell-out season in Toronto.

As Angie Watts in EastEnders, Anita Dobson created one of the most popular characters in television winning numerous awards. Her West End theatre credits include ‘Madame Morrible’ in “Wicked”, ‘Mama Morton’ in “Chicago”, ‘Mrs Meers’ in “Thoroughly Modern Mille”, ‘Chris’ in “Calendar Girls”, ‘Joan Crawford’ in “Bette and Joan” and ‘Nancy’ in “Frozen” at the National Theatre for which she was nominated for an Olivier, Evening Standard and London Critics Award. Her film credits include “London Road”.

Craig Revel Horwood is probably best known as a judge on all 16 series of BBC1’s “Strictly Come Dancing”. He returns to the part of ‘Miss Hannigan’ having played the role to critical acclaim in this production in both the West End and on the 2015/16 UK tour. His other West End Theatre credits include 'Munkustrap' in “Cats”, “Miss Saigon” at the Theatre Royal, Drury Lane and ‘Harry’ in “Crazy for You” at the Prince Edward Theatre. Craig directed and choreographed the recent tour of “Sister Act The Musical” as well as the “Strictly Come Dancing Live” tour for the past six years. He also choreographed the film “Paddington 2”.

“ANNIE” has Music by Charles Strouse, Lyrics by Martin Charnin and a Book by Thomas Meehan. “ANNIE” is directed by Nikolai Foster with set and costume design by Colin Richmond, choreography by Nick Winston, lighting by Ben Cracknell and sound design by Richard Brooker. “ANNIE” is produced by Michael Harrison and David Ian.