ANITA DOBSON leads the cast in the world première of 3WOMEN 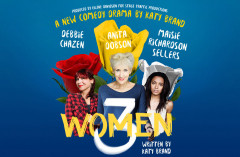 3Women, the debut play by the award-winning comedian and writer Katy Brand, will premiere at Trafalgar Studios 2, starring the celebrated screen and stage actress Anita Dobson (Eleanor), alongside Debbie Chazen (Suzanne), Maisie Richardson-Sellers (Laurie), and Oliver Greenall (Waiter). Running from 15 May to 9 June 2018, with press night on 18 May, 3Women explores the relationships between three generations of the same family, brought together in one hotel room, in a darkly comic and pertinent exploration of what it means to be a woman.

Katy Brand said, “3Women is a play I have been hoping to write for several years, but now that feminism and women’s rights are at the very forefront of the global conversation, I wanted to really explore those issues from the point of view of three generations of women, and how they interact and intersect within the same family. These movements are not so straightforward as the media would sometimes have us believe but wrapped up in the chaotic and all-too-human lived experiences of real women, from the Suffragettes to those who currently campaign for trans-gender rights. We are all simply trying our best to be ‘modern women’ (whatever that means), making mistakes, and blundering on as best we can!”

Raise a glass to female family bonding and buried resentment!

From generation to generation, Mother to Daughter, this female-led play explores what it means to be a woman in the 21st Century and the consequences of the generational gap on our attitudes, cultural expectations and family dynamic. From wedding celebrations to relationship disillusionment, 3Women is razor-sharp, funny and caustically irresistible.

This hilariously frank and original debut brings our three women and their own very different identities and opinions into one hotel suite for a single night of redemption. What will be revealed?

3Women is directed by Michael Yale, with designs by Zahra Mansouri, lighting by Nic Farman, and is produced by Stage Traffic Productions.

Film credits include: Seaview Knights, Beyond Bedlam, The Tichborne Claimant, The Revengers' Comedies, Darkness Falls, Charlie, Solitary, The Rise Of The Krays, The Fall Of The Krays, London Road taken from the acclaimed National Theatre production directed by Rufus Norris, and The Fight.

Her work for television includes: Holby City, The Last Kingdom, Dead Pixels, Agatha Raisin, You, Me And The Apocalypse, Ambassadors, Asylum, Sherlock, Trollied, The Spa, Coronation Street, Doctor Who, Tittybangbang, This Is Jinsy, White Van Man, Doctors (nominated for Villain of the Year - Soap Awards 2010 for 12 episodes as Sissy Juggins), We Are Klang, Psychoville, The Smoking Room, Nicholas Nickleby, Mine All Mine, Murder In Suburbia, Doc Martin, Midsomer Murders, Gimme Gimme Gimme, Lucy Sullivan Is Getting Married, Tess Of The D'urbervilles, A Christmas Carol and The Lakes.

Maisie Richardson-Sellers’ (Laurie) theatre credits include: Mephisto (Oxford Playhouse), and They Will Be Red and For Coloured Girls Who Have Considered Suicide (Oxford University). Television credits include: Legends Of Tomorrow (CW), Of Kings And Prophets (ABC), and The Originals (CW). Film credits include: Korr Sella in Star Wars VII and Melody in Melody (Short).

Oliver Greenall (Waiter) is an actor, writer and director. He was born in Scotland and trained at PACE Youth Theatre. During his final year of school, he was scouted by the model agency Models 1 and worked on various international campaigns for some of the largest fashion houses in the world. He went on to study at Glasgow University and received a BA in filmmaking and screenwriting at UWS. In 2015, he wrote and directed his first short film Directions, which was screened at festivals all around the world, including the London Short Film Festival in 2017. Television credits include: series regular Jordan Whitehead in ITV’s The Loch, and Armchair Detectives for BBC Television. Oliver will be making his West End debut at the Trafalgar Studios in 3Women.

Katy Brand (Writer) is one of Britain’s leading comics, receiving the British Comedy Award for the Best Female Comedy Breakthrough Artist in 2008. Also a successful actress and writer, Katy is most well-known for Channel 4’s Comedy Lap Slap (2006) and the hilarious ITV hit ‘Katy Brand's Big Ass Show’ (2007), where she won two awards including Best Newcomer at the 2008 British Comedy Awards. She has also starred alongside Emma Thompson in Nanny McPhee and The Big Bang (2010), as well as TV favourites such as Never Mind The Buzzcocks (2010) and Peep Show (2006). Katy’s comedy panache has also transferred into a talent for storytelling, with her novel Brenda Monk is Funny (2014) becoming a firm favourite with audiences and fellow writers alike. Here, her flair for writing, observation and comic ability fuse together in perfect harmony to create her debut play 3Women.

Michael is co-artistic director and founding member of Stage Traffic Productions. He trained at LAMDA and continues to act and write for theatre and television.

Eilene Davidson (Producer) trained at Guildford School of Acting and worked as an actress performing on stage and screen in her twenties. She then moved to the States and studied playwriting and screenwriting and worked as a freelance writer. Her company Stage Traffic was set up in 2016 to exclusively showcase new writing. She recently produced acclaimed plays including: This Little Life of Mine (Park Theatre, London), and Late Company (Trafalgar Studios, London). Eilene has also produced or co-produced A Life Of The Mind (Southwark Playhouse), Insignificance (Langham Place, NYC), War Paint (Nederland Theatre, NYC), Apologia (Trafalgar Studios, London) and The Grinning Man currently showing in London (Trafalgar Studios). In 2018, Eilene is producing Monogamy (UK Tour/Park Theatre), Paper Dolls (Mosaic Theatre, Washington DC), and this October she will produce the award nominated European premiere of A Guide For The Homesick in a transfer from the USA to London. She is also on the board of the award-winning Huntington Theatre in Boston USA.

Stage Traffic Productions is a dynamic new UK/US theatre production company. Based in London, but looking at inspiration from around the globe, it is committed to creating productions with a strong emphasis on contemporary storytelling that truly resonates with modern audiences. The company’s last production, Late Company (Trafalgar Studios), was met with universal critical acclaim and has made the shortlist for Best New Production of a Play at this year’s Broadway World Awards. The company’s inaugural production was the musical This Little Life of Mine, which ran at the Park Theatre in 2016. The show was nominated for many awards, including Best New Musical Production - OffWestEnd Awards and Best Musical, Best Director and Best Actress - Broadway World Awards. Eilene and Michael first met as actors 18 years ago and since then both have worked additionally in the role of writer, director and producer, both in the States and the UK.