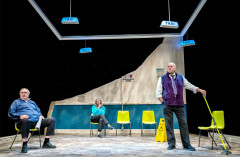 The world première of John Godber’s new comedy Angels of the North transfers to the West End, opening at the Trafalgar Studios on 14 May, with previews from 12 May, and runs until 6 June. The production ran at Theatre Royal Wakefield until 15 February, ahead of performances at East Riding Theatre from 4 – 28 March.

Dennis and Mick are the worst taxi drivers in the North; ignorant, offensive and rude! But when longstanding owner Val suddenly dies, they have to deal with her savvy, streetwise, tourism guru of a niece; feisty new graduate Roxy, who takes over the running of the firm.

Set before, during and after, the General Election on 12 December 2019, Angels of the North is a hilarious and touching insight into what it means to the North now the red wall has fallen, seen through the eyes of a struggling taxi firm at the end of the line.

Dennis and Mick might be the worst taxi drivers on the planet, but they know what it takes to survive. Roxy might be a thorn in their side, but she may well just be an angel in disguise.

Written as a companion piece to the hugely successful and critical hit, Scary Bikers, Angels of the North is a contemporary comedy which negotiates the idea of a new North under a new government. Told with the signature wit and dry observations which make Godber's work so popular.

John Godber plays Dennis, and is joined on stage by his former student Adrian Hood (Mick), and creating the part of Roxy is Martha Godber who recently graduated from LIPA.

John Godber said today, “I can’t wait to be on stage with both my former pupil and my daughter - they’ll certainly keep my on my toes! The response to Scary Bikers in London was wonderful, enjoying both critical and audience acclaim, and we look forward to taking this new authentic slice of Yorkshire life back into the West End.”

John Godber is a writer and director. His plays are performed across the globe, making him one of the most performed writers in the English language. He has won numerous awards for his plays, including a Laurence Olivier Award and seven Los Angeles Drama Critics ‘Circle Awards. His credits as a playwright include Scary Bikers, This is Not Right, Bouncers, Up ‘n’ Under (Olivier Award for Best New Comedy), April in Paris, Teechers, Blood, Sweat and Tears, Cramp, Happy Jack, September in the Rain, Salt of the Earth, Passion Killers, Happy Families, Up ‘n’ Under ll, Gym and Tonic, Dracula, Lucky Sods, Hooray for Hollywood, Weekend Breaks, It Started With a Kiss, Unleashed, Thick As a Brick, Big Trouble in the Little Bedroom, Seasons in the Sun, On a Night Like This, Our House, Departures, Men of the World, Reunion, Screaming Blue Murder, Black Ties and Tales, Perfect Pitch, Going Dutch, Christmas Crackers and Crown Prince. For the screen, he also devised the BBC2 series Chalkface, and his screenplay My Kingdom for a Horse was nominated for an Alternative BAFTA Award. His first feature film, Up ‘n’ Under, was released in January 1998. In 2005, he co-wrote Odd Squad for BBC2 with his wife, Jane Godber, which was shot in Hull using local actors - winning two BAFTAs in the Schools Drama category and in the Original Writer section. He was Artistic Director or Hull Truck for 26 years, years, taking it from bankruptcy in 1984 to its new home in a £15 million theatre in 2010; and in 2011 set up The John Godber Company with his wife.

Martha Godber recently graduated from the Liverpool Institute for Performing Arts. For theatre her work includes Seasons in the Sun (East Riding Theatre and Theatre Royal Wakefield), POP (Oldham Coliseum), The Memory Project, The Remarkable Tale of Dorothy Mackail (Smashing Mirrors Theatre), I Want That Hair (East Riding Theatre), Three Emos (UK tour), RIGHT (The Old Vic), This Is Not Right (Wilton’s Music Hall) and Slung Low Shorts. For television, her work includes South Riding; and for film, Residue and The Last Laugh. For BBC Radio 4, her work includes The Gift, Fact to Fiction, D for Dexter and Talk to Me: HP Lovecraft. She was a finalist in the Spotlight Showcase 2018, and was awarded the Joan Plowright Lady Olivier Award 2018 for best acting performance.

Adrian Hood attended Minsthorpe High School where John Godber was his Drama teacher. His first professional job was at the Theatre Royal Wakefield in Salt of the Earth by Godber, before going on to work with Hull Truck in many different shows including Bouncers, Fly Me To The Moon, Perfect Pitch, Our House, Weekend Breaks, Up n Under, Up n Under II, Stand, Billy Liar and Pub Quiz is Life. His other theatre work incudes Harvest (Royal Court Theatre), The Rise and Fall of Little Voice, The Comedy of Errors (National Theatre), Much Ado About Nothing, The Mystery Plays (Shakespeare’s Globe) and more recently for Hull’s City of Culture he appeared in the RSC’s production of The Hypocrite. For television, his work includes as series regular Norman in dinnerladies, All Quiet on the Preston Front, The Syndicate, Ben and Lump, Zen, Kingdom, The Invisibles, The Last Detective, Johnny Shakespeare, Not Going Out, Oddsquad, Feel the Force, Micawber, Thunder Road, Buried, Stan the Man, Victoria Wood with All The Trimmings, Witness against Hitler, Hibbert and Long, Chernobyl, Harry, My Kingdom For A Horse, Small Zones; and for film, Up ‘n’ Under, Magicians, Brassed Off, Undercliffe and Pond Life.