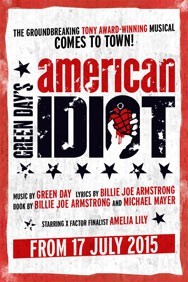 The acclaimed revival of the multi award-winning musical American Idiot that has wowed critics at the Arts Theatre has announced that it is extending booking until 22 November 2015.

The Broadway musical penned by US super-band Green Day opened at the Arts Theatre, situated in the heart of London’s West End back in July this year and was originally scheduled to run until September 2015.

American Idiot tells the story of three best friends that feel lost in a world that has no meaning for them. These boyhood companions stumble through the landscape of an America forever changed by the events of 9/11 and search for acceptance and purpose.

With music and lyrics by Billie Joe Armstrong, and book by Michael Mayer, the show features some of Green Day’s best known songs such as, ’21 Guns’, ‘Holiday’, ‘Boulevard of Broken Dreams’, ‘Wake Me Up When September Ends’ and the title song ‘American Idiot’.

The producers of American Idiot said in a statement ‘We have been overawed by the unbelievable response from audiences and are thrilled to be extending our stay at the Arts Theatre. We look forward to welcoming more members to join our Idiot Nation!’

American Idiot is currently playing at the Arts Theatre until 22 November 2015.