Casting update for ALYS, ALWAYS at the Bridge Theatre

by Best of Theatre Staff on Wednesday 12 December 2018, 10:44 am in Cast Changes and Announcements 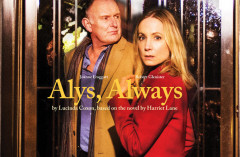 Directed by Nicholas Hytner and based on the novel by Harriet Lane, Alys, Always begins previews at the Bridge Theatre on 25 February with opening night on 5 March, running to 30 March 2019. Evening performances are Monday to Saturday at 7.30pm with weekday and Saturday matinees at 2.30pm (check website for details). Set designs are by Bob Crowley with costume designs by Christina Cunningham,lighting by Jon Clark, music by Grant Olding, sound by Gareth Fry and video designs by Luke Halls.

Frances works on the books pages of a Sunday newspaper. She’s quiet and capable, but nobody takes much notice: her face is pressed to the window, on the outside, looking in. One evening, driving back to London after visiting her infuriating parents, she comes across an upturned car crumpled on the side of the road. She waits with the injured driver, Alys Kyte, until the ambulance arrives. Later, when Alys’s famous family gets in touch, Frances finds herself for the first time ushered into the world on the other side of the window. And she begins to wonder: what would it take to become a player? A gripping psychological thriller that excavates the fault line that separates the entitled from the unentitled.

On television Joanne Froggatt played Anna Smith in all six seasons of Downton Abbey for which she was the recipient of a Golden Globe award as well as three Emmy nominations. She is currently filming the feature film of the same period drama. Last year she was seen in Sundance TV and ITV’s Liar which has now been commissioned for a second series. Her previous theatre credits include The Knowledge and Little Platoons at the Bush Theatre, All About My Mother at the Old Vic, Who's Afraid of Virginia Woolf? at the Manchester Royal Exchange, Playhouse Creatures at the West Yorkshire Playhouse and Be My Baby for Soho Theatre. On film Froggatt recently played alongside Ed Harris and Rich Sommer in the independent feature A Crooked Somebody. Her other film credits include Mary Shelley, One Last Thing, Starfish, A Street Cat Named Bob and Filth. She won Best Newcomer at the British Independent Film Awards for her film debut in In Our Name.

Robert Glenister was last seen in Moonlight and Night School as part of Jamie Lloyd’s Pinter at the Pinter season. His many other theatre credits include Glengarry Glen Ross at the Playhouse Theatre, Great Britain and Blue Remembered Hills for the National Theatre, Noises Off at the Old Vic and Novello, The Late Middle Classesfor the Donmar Warehouse, Hedda Gabler for the Theatre Royal, Bath, The Winterling for the Royal Court and Measure for Measure, The Spanish Tragedy and Little Eyolf for the Royal Shakespeare Company. His many television credits include Curfew, Paranoid, The Musketeers, Cold Feet, Close to the Enemy, Vera, The Great Train Robbery, The Café, We’ll Take Manhattan, Hustle and Spooks. Glenister’s film credits include The Aeronauts, Journey’s End, Live by Night, Cryptic, Creation, Laissez Passer, The Visitors, All Forgotten, Secret Rapture and Quadrophenia.

Danny Ashok’s theatre credits include Guards at the Taj, Zaida and Aadam and Disgraced at the Bush Theatre, The Djinns of Eidgah at the Royal Court, Henry IV Parts 1 & 2 for The Peter Hall Company and Blood & Gifts for the National Theatre. On television he has been seen in Holby City, Doctors, Silk, Casualty, Coronation Street and The Bill.

Joanna David was last on stage in Absolute Hell at the National Theatre where she previously appeared in Stages. Her other theatre credits include Hobson's Choice at Regent's Park Open Air Theatre, The Family Reunion at Vaudeville Theatre, Ring Round the Moon at the Playhouse Theatre, A Voyage Round My Father at the Donmar Warehouse, Breaking the Code and The Cherry Orchard at the Theatre Royal Haymarket, The Family Reunion, Uncle Vanya and The Importance of Being Earnest for the Manchester Royal Exchange. On television her credits include The Boy with the Topknot, Agatha Raisin, Downton Abbey, Death in Paradise, Casualty, Rebecca, Sense and Sensibility and War and Peace.

Simon Manyonda was last seen in the Barber Shop Chronicles at the National Theatre, where his previous credits also include Light Shining in Buckinghamshire, King Lear, Greenland and Welcome to Thebes. His other theatre credits include King Lear at the Old Vic, Giving and Wildefire at Hampstead Theatre and A Midsummer Night’s Dreaming and Julius Caesar for the Royal Shakespeare Company. His television credits include Shakespeare and Hathaway, Uncle, Doctor Who and Holby City, Suspects and Whitechapel.

Sylvestra Le Touzel was recently seen in Hogarth’s Progress: The Art of Success and The Taste of the Town at the Rose Theatre. Her other theatre credits include The Pride of Miss Jean Brodie, Les Parents Terribles and Ivanov for theDonmar Warehouse, Giving, Imagine Drowning, Fall and The War at Home for Hampstead Theatre, Wild East, My Heart’s a Suitcase, Ourselves Alone, Unity and Glasshouses for the Royal Court as well as multiple productions for the National Theatre and Royal Shakespeare Company. Her television credits include The Crown, Endeavour, The Thick of It, Utopia and Mansfield Park.

Jeff Rawle was last seen at the Bridge in Nicholas Hytner’s production of Allelujah!. His other theatre credits include Saint George and the Dragon, Cocktail Sticks, Fram, The Power of Yes and Noises Off at the National Theatre, High Society at the Old Vic, Handbagged at the Tricycle and Vaudeville Theatre, Bottle Universe at the Bush Theatre and Way to Heaven, The Arbor, The Irish Soldier and Bent at the Royal Court. On television he has been seen in The Durrells, The Outcast, Heading Out, Holby City, The Charles Dickens Show, Hollyoaks, The Sarah Jane Adventures, Secret Diary of a Call Girl, Doc Martin, New Tricks, Spooks, Drop the Dead Donkey, Billy Liar and Doctor Who. His film credits include A Modern Tale, Peterloo and Harry Potter and the Goblet of Fire.

Vineeta Rishi’stheatre credits include Who Cares for the Royal Court, Hobson’s Choice for the Young Vic, Beasts and Beauties for the Bristol Old Vic and What We Did to Weinstein for the Menier Chocolate Factory. She has been seen on television in Boy Meets Girl, Doctors, Waking the Dead, The Last Detective and Doctor Who.

Sue Wallace was last seen at the Bridge in Nicholas Hytner’s production of Allelujah!. Her previous theatre credits include Husbands and Sons, Emil and the Detectives and Hymn/Cocktail Sticks for the National Theatre, A Cream Cracker Under the Settee for Bolton Octagon, Billy Liar and Everybody Loves a Winner at Royal Exchange Manchester, Hay Fever for Chichester Festival Theatre and The Merry Wives of Windsor at Shakespeare’s Globe. Her television credits includes In the Club, Quick Cuts, Shameless, In the Flesh, The Royal, Housewife 49, Coronation Street, Wire in the Blood, Casualty, The Locksmith, Common as Muck, Martin Chuzzlewit, Pat and Margaret, Making Out, Bergerac and Victoria Wood as Seen on TV. Her film credits includes I Give It a Year, Is There Anybody There, Blue Money and Experience Preferred but Not Essential.

Sam Woolf can currently be seen in Antony and Cleopatra at the National Theatre. His other theatre credits include The Winter’s Tale for the Barbican and King Lear for the Rose Theatre.

Alys, Always was Harriet Lane’s debut novel, published in 2012, and was followed in 2014 with Her. Previously Lane wrote for the Guardian and the Observer as well as Vogue and Tatler.

Nicholas Hytner co-founded the London Theatre Company with Nick Starr. He was Director of the National Theatre from 2003 to 2015, where the productions he directed included The History Boys, Hamlet, One Man, Two Guvnors, and Othello. His films include The Madness of George III, The Lady in the Van and The History Boys. Hisbook Balancing Acts is published by Jonathan Cape. For the Bridge, Hytner has directed Young Marx, Julius Caesar and Allelujah! and will be directing the forthcoming immersive production ofA Midsummer Night’s Dreamopening in June 2019.