by Best of Theatre Staff on Thursday 8 December 2016, 10:46 am in Cast Changes and Announcements 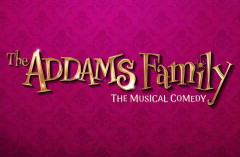 Aria Entertainment and Music & Lyrics Limited are delighted to announce the full cast for the UK and Ireland tour of the musical comedy, The Addams Family.

Cameron Blakely will be joining the family in the role of Gomez Addams. Cameron’s previous theatre credits include the role of Thenardier in Les Misérables, a role he played for two years in London’s West End. Cameron was also part of the 25thAnniversary at the O2, where he played Bamatabois. Other credits include Smee in Stiles and Drewe’s Peter Pan at the Adelphi Theatre and Fagin in Oliver! at The Watermill Theatre. He has also appeared in many productions at Regent’s Park Open Air Theatre, including A Midsummer Night’s Dream, Hamlet, Romeo and Juliet and The Taming of the Shrew.

Also joining the family is Valda Aviks in the role of Grandma Addams. Her previous theatre credits include Mrs Meeker in Funny Girl (Savoy Theatre/Menier Chocolate Factory), Barushka in Once(Dublin/ Phoenix Theatre) and Granny in Into the Woods (Regent’s Park Open Air Theatre).

Charlotte Page will play Alice Beineke. Her previous theatre credits include the role of Christine in Phantom of the Opera (West End), A Little Night Music (Menier Chocolate Factory), the UK tour of Pygmalion for Theatre Royal Bath and Follies in Concert at the Royal Albert Hall.

Dale Rapley will play the role of Mal Beineke. His previous theatre credits include King John (Rose Theatre Kingston), Richard III (West Yorkshire Playhouse), Women on the Verge of A Nervous Breakdown (West End), The Wizard in Wicked (UK tour), and A Midsummer Night’s Dream at Regent’s Park Open Air Theatre and for the RSC.

Grant McIntyre will be playing the role of Pugsley Addams in his first UK tour, following recent roles in We are Here at the National Theatre and Bugsy Malone at the Lyric Hammersmith.

Oliver Ormson will appear as Lucas Beineke. Most recently, he played Elder Price in The Book of Mormon in the West End.

The Addams Family will be directed by Matthew White, with choreography by Alistair David, production design by Diego Pitarch, musical supervision by Richard Beadle, lighting design by Ben Cracknell and musical direction by Andrew Hilton. Book is by Marshall Brickman and Rick Elice, and music and lyrics by Andrew Lippa, based on the characters created by Charles Addams.

THE ADDAMS FAMILY UK & Ireland Tour is produced by Aria Entertainment and Music & Lyrics Limited, in association with the Festival Theatre Edinburgh, and is presented through special arrangement with Theatrical Rights Worldwide. The UK Tour will open in Edinburgh on 20 April 2017.