UK Tour Announced SO YOU THINK YOU KNOW ABOUT DINOSAURS 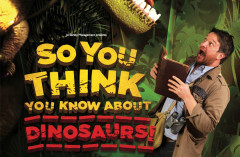 After a successful tour in 2017, Jo Sarsby Management are delighted to welcome the return of ‘SO YOU THINK YOU KNOW ABOUT DINOSAURS’ starring Doctor Ben Garrod which will open at Theatre Severn, Shrewsbury on the 1 March 2018.

Dinosaur aficionado Ben Garrod stars in this hit stage show which will take audiences on an exciting pre-historic adventure through an interactive, educational and highly entertaining show. With the help of TV film footage from BBC's 'Planet Dinosaur’ and photos of his own palaeontological dinosaur digs, he will tell you everything you ever wanted to know about dinosaurs - and more.

Doctor Ben Garrod is an English evolutionary biologist, primatologist and broadcaster and a Teaching Fellow at Anglia Ruskin University. He completed a doctorate at University College London and the Zoological Society of London. Ben has presented several television shows, including ‘Attenborough and the Giant Dinosaur’with Sir David Attenborough, ‘Hyper Evolution: Rise of the Robots’ for BBC Four and ‘The Day the Dinosaurs Died’ on BBC Two. He also presented his own award-winning six-part series for the BBC called ‘Secrets of Bones’.

This hit live show will talk audiences through the deadliest predators that ever roamed the planet 65 million years ago such as Tyrannosaurus rex, Allosaurus and Spinosaurus. This show will be heading to 26 venues next spring including Cambridge, Winchester, Bury St Edmunds, a limited run at the Pleasance Theatre in Islington, finishing in Teignmouth Pavilions on the 14April 2018. Full tour listings are below.