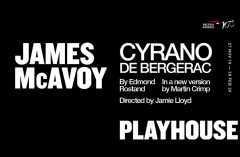 Cyrano de Bergerac sees Jamie Lloyd and James McAvoy continue their long-standing collaboration following The Ruling Class and Macbeth at Trafalgar Studios, Three Days of Rain at Apollo Theatre and Heart of Darkness for BBC Radio 4. The production opens at Playhouse Theatre on 6 December, with previews from 27 November and runs until 29 February.

The Jamie Lloyd Company, supported by British Airways, deepens its commitment to making theatre more accessible, offering 15,000 free tickets to first time theatre-goers, invited through a special outreach programme and 15,000 tickets for £15 for key workers, under 30s, and those receiving job seeker’s allowance or other government benefits.

Jamie Lloyd said today,“I can’t wait to get back into the rehearsal room with James McAvoy, who shares my commitment to accessibility in the arts. In a radical move for the West End, we will invite thousands of people who have never visited a theatre before to experience our work, performed by world-class actors, for free. That’s 15,000 completely free tickets across the season, thanks to our relationship with Ambassador Theatre Group and the new partnership with British Airways. Every day, we talk about making theatre more accessible to absolutely everyone, but, inspired by free museum and gallery entry, I believe that true and meaningful access actually means free tickets. I hope that this inspires other theatre companies and producers to investigate similar schemes in the future, changing the landscape of West End theatre forever.”

Carolina Martinoli, Director of Brand and Customer Experience at British Airways added, “Theatre is a central part of Britain’s culture which attracts millions of visitors from all over the world. British Airways has a history of championing British talent, so it is a natural fit to support this season and champion extraordinary creativity in British theatre – both at home and around the World.”

Withdesign by Soutra Gilmour, Lighting Design by Jon Clark, Sound and Composition by Ben and Max Ringham and Fight Direction by Kate Waters.

Tickets for Cyrano de Bergerac will be available to book from September 2019.

Martin Crimp’s theatre credits include When We Have Sufficiently Tortured Each Other, In the Republic of Happiness, Play House, The City, Fewer Emergencies, Cruel and Tender, The Country, Attempts on Her Life, The Treatment, Play with Repeats, Dealing with Clair, Definitely the Bahamas, Four Attempted Acts and Living Remains. His work in the UK has been produced by Orange Tree Theatre, West Yorkshire Playhouse, Stephen Joseph Theatre, RSC, Young Vic and the Royal Court Theatre where he was writer-in-residence in 1997. In New York his work has been seen at the Public Theater and the Classic Stage Company, as well as on Broadway.