SINGIN' IN THE RAIN at the Palace Theatre February 2012 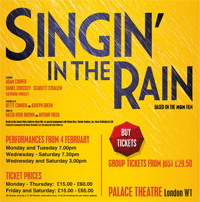 Jonathan Church’s new production of Singin’ in the Rain is to transfer to the Palace Theatre following its critically acclaimed, sell-out run at Chichester Festival Theatre. Church’s production of Singin’ in the Rain, with choreography by Andrew Wright, is based on the classic 1952 MGM film and produced in the West End by Stage Entertainment UK and Chichester Festival Theatre, and is booking at the Palace Theatre from 4 February 2012, initially through to 29 September 2012. The production will open on TUESDAY 15 FEBRUARY, with tickets on public sale from MONDAY 26 SEPTEMBER 2011.

The West End cast is led by Adam Cooper as Don Lockwood, Daniel Crossley as Cosmo Brown, Scarlett Strallen as Kathy Seldon and Katherine Kingsley as Lina Lamont, with Michael Brandon as RF Simpson and Sandra Dickinson as Dora Bailey/Miss Dinsmore, all of whom will reprise their roles from the original Chichester production.

Singin’ in the Rain features songs by Nacio Herb Brown and Arthur Freed, including Make ‘em Laugh, Good Morning, Moses Supposes and Singin’ in the Rain, original screenplay and adaptations are by Betty Comden and Adolph Green. With choreography by Andrew Wright, the production is designed by Simon Higlett, with sound by Matt McKenzie and lighting by Tim Mitchell. Church’s production of Singin’ in the Rain opened on 27 June 2011 at the Festival Theatre, Chichester, where it played to capacity houses and extended its run to cope with demand. The 1952 MGM film of the same name, which will celebrate the 60th anniversary of its release next year, starred Gene Kelly, Donald O’Connor and Debbie Reynolds and is considered one of the most beloved and enduring movie musicals of all time.

Don Lockwood is a silent movies star with everything he could want - fame, adulation and even a well-publicised ‘romance’ with his co-star Lina Lamont. But Hollywood is about to change forever. There is rumour in the studio of a new kind of film, where the actors actually talk… and sing... and dance.

Multi award-winning Adam Cooper’s theatre credits include Sky Masterson in Guys and Dolls at the Piccadilly Theatre, Tin Man in The Wizard of Oz, On Your Toes and The Wind in the Willows at the Royal Festival Hall and Zorro on tour in the UK. With the Adventures in Motion Pictures Company as well as playing the Angel in Cinderella, he created the award-wining role of the Swan in Swan Lake, which, after opening at Sadler’s Wells Theatre, transferred to the West End, LA and Broadway. As a member of the Royal Ballet Company (1989-97) his numerous credits include Romeo and Juliet, Myerling, The Judas Tree, Onegin and La Ronde.

Daniel Crossley’s theatre credits include Me and My Girl and A Chorus Line for Sheffield Theatres, Anything Goes and Love’s Labour’s Lost for the National Theatre, Kiss of the Spider Woman for Hull Truck Theatre, The Snow Queen for Derby Theatre, Hello, Dolly!, As You Like It, Oh! What a Lovely War and Romeo and Juliet for Regent’s Park Open Air Theatre and Mary Poppins on tour in the UK. His television credits include Doctors, Heartbeat and Coronation Street.

Scarlett Strallen’s theatre credits includes The Music Man at Chichester Festival Theatre, Passion for the Donmar Warehouse, the title role in Mary Poppins in the West End and on Broadway, The Merry Wives of Windsor for the Royal Shakespeare Company, The Witches of Eastwick at the Theatre Royal Drury Lane, Chitty Chitty Bang Bang at the London Palladium and HMS Pinafore, Twelfth Night and Cymbeline for Regent’s Park Open Air Theatre. Her film credits include Beyond The Sea and The Snow Queen.

Katherine Kingsley’s theatre credits include The 25th Annual Putnam County Spelling Bee for the Donmar Warehouse, Aspects of Love at the Menier Chocolate Factory, Piaf at the Donmar Warehouse and Vaudeville Theatre, (Olivier Award nomination) High Society at the Shaftesbury Theatre, The Canterbury Tales at Bristol Old Vic and The 39 Steps at the Liverpool Playhouse and on UK tour. Her film credits include Days of the Siren, Now We Are Three and 100 Second Marriage.

Michael Brandon’s UK theatre credits include the title role in Jerry Springer - The Opera which opened at the National Theatre and transferred to the West End, Wet Weather Cover at the Arts Theatre, Speed The Plow for the Theatre Royal Lincoln and On the Waterfront for the Hackney Empire. On television he is known for playing Dempsey opposite Glynis Barber in Dempsey and Makepeace. His other television credits include roles in Hustle, The Last of the Lehman Brothers, Doctor Who, New Tricks, Trial and Retribution and Ally McBeal. His film credits include Captain America – The First Avenger, Me and Orson Welles and Presumed Dangerous.

Sandra Dickinson’s theatre credits include A Woman of No Importance for Salisbury Playhouse, the UK tour of Anything Goes, Chitty Chitty Bang Bang at the London Palladium, The Graduate at the Gielgud Theatre, Orpheus Descending at the Donmar Warehouse and Not About Nightingales for the National Theatre. Her television credits include White Van Man, Two Point Four Children, New Tricks, The Hitchhiker’s Guide to the Galaxy and Doctor Who. Her film credits include Tormented and Malice in Wonderland.

Jonathan Church has been Artistic Director of Chichester Festival Theatre since 2006. In the West End he has directed Of Mice and Men at the Savoy and The Old Vic, The Witches at Wyndham's and A Busy Day at the Lyric Theatre. His productions at Chichester include The Real Inspector Hound, The Critic, The Grapes of Wrath, The Life and Adventures of Nicholas Nickleby, Hobson’s Choice, The Circle and Pravda.

Previously for Chichester Festival Theatre award-winning Andrew Wright has choreographed 42nd Street. His other choreography credits include By Jeeves for the Landor Theatre, Almost Like Being In Love at the National Theatre, Naked Boys Singing at the King’s Head and Arts Theatre and The Showgirl Within at the Garrick Theatre. As well as many pantomimes he has choreographed six performances of The Night of 1000 Voices at the Royal Albert Hall, Sunday Night at the Theatre Royal and Evita for Leeds Grand Theatre.