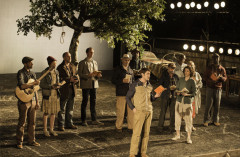 Regent’s Park Open Air Theatre’s critically acclaimed production of ‘TO KILL A MOCKINGBIRD’ will return for a UK tour in 2019, opening at Curve Leicester on 7 February. With further dates soon to be announced.

This utterly enchanting and timely production from London's award-winning Regent’s Park Theatre captures the warmth, poignancy and magic of this best-loved classic.

This production of ‘TO KILL A MOCKINGBIRD’ opened Regent’s Park Open Air Theatre’s 2013 season and toured the UK in 2015 to critical acclaim and sell out performances, including a month-long residency at The Barbican. Proving its success across every art form, the 1960 novel was awarded the Pulitzer Prize, followed by the film adaptation in 1962 which won three Oscars out of the eight it was nominated for.

The best-selling novel by Harper Lee has been adapted for the stage by Christopher Sergel. Originally directed for Regent’s Park by Timothy Sheader, the touring production will be directed by Fiona Dunn. The UK tour of ‘TO KILL A MOCKINGBIRD’ is produced by Jonathan Church Productions, Curve and Regent's Park Theatre.