by Best of Theatre Staff on Tuesday 1 October 2019, 11:43 am in Cast Changes and Announcements 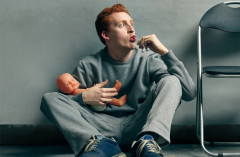 “He’ll look different. My little boy. When I get out. Like… to the picture I’ve got in my head. Be like meeting him all over again. Be a whole new start.”

Instead of GCSEs, Cain, Riyad and Jonjo got sentences. Locked up in a young offenders’ institution, they trade sweets, chat shit, kill time – and await fatherhood.

Grace’s job is to turn these teenagers into parents, ready to take charge of their futures. But can they grow up quickly enough to escape the system?

Samuel Bailey was born in London and raised in the West Midlands. He began writing plays in Bristol and developed work with Bristol Old Vic, Tobacco Factory Theatres and Theatre West before moving back to London. He is an alumnus of the Old Vic 12 and Orange Tree Writers’ Collective. Shook was originally supported by the MGCfutures bursary programme, and will be his debut full production.

Josef Davies plays Jonjo. His previous theatre credits include Hangmen (Royal Court Theatre, Wyndham’s Theatre), The 306 (National Theatre of Scotland), and Junkyard (Headlong). For television, his credits include Chernobyl, World on Fire, Silent Witness, Shakespeare and Hathaway, The Bisexual, Curfew, Call The Midwife, and Uncle. For film, 1917, The King, Dumbo, Undercliffe, and The Limehouse Golem.

Ivan Oyik plays Riyad. He graduated from Guildford School of Acting in 2019. His previous theatre credits include Blue Orange (Birmingham Rep – for which he was nominated for The Stage Debut Award for Best Actor in a Play) and Red Pitch (Ovalhouse).

Turvey trained as an actor at the Academy of Live and Recorded Arts (ALRA) and has appeared on stage and screen throughout the UK and internationally, including the lead roles in the world première of Arthur Miller’s No Villain (Old Red Lion Theatre and Trafalgar Studios) and Batman Live World Arena Tour. As a dramaturg, he has led the development of all of Papatango’s productions. He is the co-author of Being A Playwright: A Career Guide For Writers, published by Nick Hern Books.

Papatango is a charity who discover and champion new playwrights by running free, open-application opportunities.

The Papatango New Writing Prize is free to enter and open to any resident of the UK or Ireland. It is assessed anonymously by a reading team which identifies as at least 50% female and is at least 25% BAME. All entrants receive personal feedback on their scripts, an unmatched commitment to supporting aspiring playwrights. The 2019 Prize assessed and gave personal feedback to 1,406 plays. The winner is guaranteed a full production, publication, royalties and commission. The Prize was the first UK award to make such a commitment, changing the landscape for new writing. Writers discovered through the Prize have won BAFTAs, OffWestEnd and Royal National Theatre Foundation awards, premiered in over 20 countries, and worked with the RSC, National Theatre, BBC and HBO.

As well as the Prize, Papatango offers a yearly Resident Playwright scheme, taking an emerging playwright through commissioning, development and production of a new play. Previous Residents have won an Alfred Fagon Audience Award, adapted their play for BBC Radio Four, been commissioned by Headlong, the Tricycle Theatre, and the North Wall Arts Centre, and seen their work tour nationwide with Papatango.

Papatango’s first book, Being A Playwright: A Career Guide for Writers, was published in autumn 2018 by Nick Hern Books. It topped Amazon’s best-seller list in the playwriting category, and has been described as a “phenomenon for playwriting good…a bible for playwrights” by Steve Waters and “enlightening…an excellent tool for playwrights” by Indhu Rubasingham.