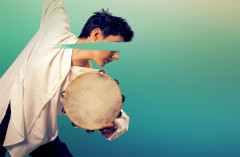 ‘Nora slammed the door on a broken, obsolete system for us, and now a hundred years later we have this free, independent union.’

Samuel Adamson maps a constellation of four queer stories within four generations in one family. The world première of this captivating study of sexuality across the ages is directed by Artistic Director Indhu Rubasingham.

Artistic director of Kiln Theatre and director of Wife, Indhu Rubasingham said today, “I am very proud that Wife is receiving its world première at Kiln Theatre. The play explores the changes within the institution of marriage, from the 1950s to today to an imaginative future, and we are excited to ignite discussion around queer identities and the boxes society tries to put us in.”

Writer Samuel Adamson added, “I’m delighted that the world première of Wife is taking place at the Kiln, and that Indhu Rubasingham is directing the play. It’s a particular honour to be a part of the opening season of the beautifully refurbished theatre, which is such a welcoming space for communities – local, national and international – to come and share stories.”

Calam Lynch plays Eric/Cas. His theatre credits include Much Ado About Nothing (Rose Theatre Kingston). His television credits include Derry Girls and Mrs Wilson; and for film, Dunkirk.