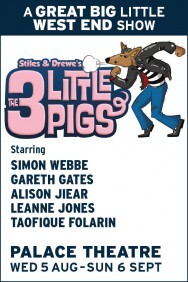 Stiles and Drewe’s reimagining of the classic children’s tale is due to start rehearsals soon, which will see the all star cast getting their teeth into the brilliant family musical.

Pop Idol contestant Gareth Gates may be a successful recording artist, but his theatre work includes some of the biggest shows in the West End such as, Legally Blonde, Les Miserables and Joseph and the Amazing Technicolour Dreamcoat.

Britain’s Got Talent star Alison Jier is also no stranger to the West End stage, having been in On the Town, Shoes and received an Olivier-nominated for her role in Jerry Springer The Opera.

Leanne Jones stunned audiences in Hairspray at the Shaftsbury Theatre a few years ago, whilst Taofique Folarin has stared in The Lion King and Avenue Q.

Stiles and Drewe, the composers of The Three Little Pigs said in a statement, ‘We love surprising and bewitching our younger audiences, some of whom will be visiting the theatre for the first time. We take it as a great responsibility to encourage and nurture audiences of the future, so we try to ensure their first experience of a musical is a memorable one’.

Three Little Pigs runs at the Palace Theatre in the mornings and afternoons from 5 August to 6 September 2015.