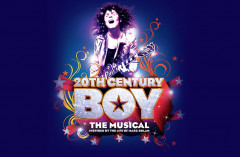 The hit musical inspired by the life of rock legend Marc Bolan, 20th Century Boy, returns to the stage on a UK-wide tour to mark the 40th anniversary of the iconic star’s untimely death. Opening on 8 March at G-Live in Guildford, the production will enjoy a 20-week tour, visiting 27 theatres through to Saturday 30 June.

The producers said: “We are delighted to welcome George Maguire back to the role of Marc. George has been involved with the show from the early workshop stages and has an incredibly close connection with the material.”

Featuring a new script by Nicky Graham and Colin Giffin, the production is directed by John Maher, and features more than 20 classic Bolan hits. 20th Century Boy is produced by Great Brit Productions.

20th Century Boy tells the life story of the legendary Bolan and his band T.Rex, exposing some of the myths and taking the audience on a tearful yet feel-good journey through Marc’s fascinating life which was cut short by a cruel twist of fate.

At his peak, Bolan was arguably the biggest rock star the UK had ever seen. Rocker, poet, electric warrior, king of glam and godfather of punk – Marc Bolan became a superstar and the press dubbed him “Bigger than the Beatles”. Before his tragic death in 1977, a few days short of his 30th birthday, Bolan lived life at breakneck speed, creating a series of iconic images, a string of number one hits and an army of obsessive fans. 20th Century Boy is a glorious celebration of glam rock at its colourful best!

Showcasing some of the greatest rock songs ever written, 20th Century Boyfeatures many of Marc Bolan and T.Rex’s best-known iconic hits, including Get It On, Ride a White Swan, Metal Guru, I Love to Boogie, 20th Century Boy and many more of their 70s classics.