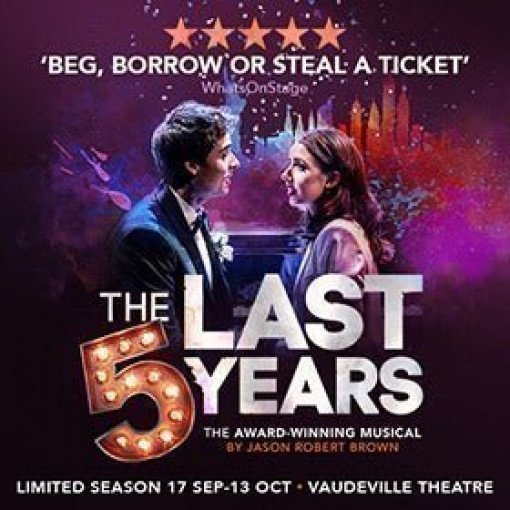 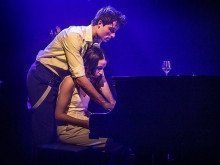 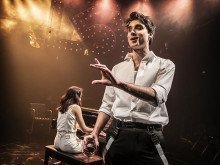 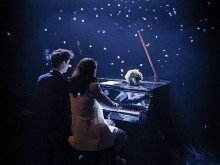 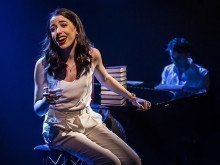 The Last Five Years comes from the magical pen of Jason Robert Brown. It premiered at the Northlight Theatre, Chicago, USA in 2001 and scored a hit Off-Broadway in 2002. It was turned into a film in 2014 following countless productions across the USA and beyond. This is the story of the five year love affair between the novelist Jamie Wellerstein and the struggling actor Cathy Hiatt, and you're going to love it.

The Southwark Playhouse production of this story was given eight Offie Awards nominations, winning those for Best Director and Best Musical Production. Actor Oli Higginson was nominated for a well-deserved Stage Debut Award for his starring role as Jamie. It enjoyed a critically acclaimed run at Southwark Playhouse and wowed people worldwide via stream.theatre. Now it's due at the West End's Vaudeville Theatre for autumn 2021.

The show is directed by Jonathan O'Boyle, and Molly Lynch and Oli Higginson reprise their dazzlingly good roles as Cathy and Jamie for the show's first long run in theatreland. Production is by Katy Lipson for Aria Entertainment, Edward Prophet and People Entertainment Group, with Dan Looney, Adam Paulden and Jason Haigh-Ellery for DLAP GROUP. Well done to everyone involved for pulling off a masterpiece!

What's the story behind The Last Five Years?

You'll adore this clever, powerful emotional drama that intimately weaves the story of two New Yorkers falling in love... then out again. The structure isn't conventional. Instead the story is told by each half of the couple from a different perspective. The actor Cathy reveals hers in reverse, from the split to the wedding, while Jamie reveals his story from the beginning. The two tales collide in the middle, for the couple's wedding, which is the only time the two characters actually meet on stage. How cool is that!

Jonathan O'Boyle's direction keeps both actors on stage throughout and involves live piano music which adds a fresh narrative dimension, together with a four piece live band. In his words, he's “delighted that our production of The Last Five Years is transferring into the West End later this year to the gorgeous Vaudeville Theatre. Seeing the production grow, and the brilliant actors go from strength to strength, was a total joy during 2020. The fact that we now get to share it with a wider audience this autumn is tremendously exciting."

About The Last Five Years

Molly Lynch made her professional debut in the West End in ENO's production of Sweeney Todd starring Emma Thompson and Bryn Terfl. Oli Higginson's theatre successes include The Haystack at Hampstead Theatre, and Maggie & Ted at White Bear Theatre, and has played a recent role on TV in the Netflix hit series Bridgerton. The creative team includes the choreographer Sam Spencer-Lane, the set and costume designer Lee Newby, the lighting designer Jamie Platt and the sound designer Adam Fisher, with musical direction by Leo Munby.

Buy tickets for The Last Five Years through our website and enjoy an easy, fast experience you can trust. We'll email your tickets to you, so all you need to do is present them at the door on the day of the performance.