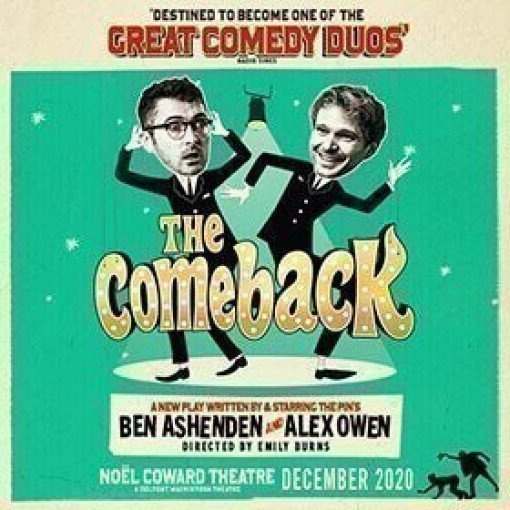 The excellent Sonia Friedman productions is genuinely thrilled to announce, at long last, a return to the West End... and there's a brand new comedy on the cards. The Comeback springs from the pens of the award-winning double act The Pin, namely Ben Ashenden and Alex Owen. It's on in theatreland for Christmas, and it's being widely described as 'hilarious and heart-warming'.

The Comeback reveals the backstage battles of two comedy duos, one fresh and young, the other fading and older but determined to resurrect their careers. The result is a 'dazzling' contemporary farce that'll have you giggling yourself silly, laughing out loud, and breathless with amusement. No wonder when it comes from a pair of creative funny men who have gained such a huge and enthusiastic Twitter following while the nation has been locked down. Better still, there'll be a fresh new surprise in the shape of guest star joining the show every night.

Obviously the Noel Coward theatre will make sure they keep to the social distancing rules, so you can safely watch the fun, a brilliantly amusing run-up to the festive season and one the critics adore.

The Pin is a comedy duo involving Ben Ashenden and Alex Owen, stars of the popular BBC Radio 4 show of the same name. They met at Cambridge University and soon became members of the famous cradle of British comedy, the Cambridge Footlights. They formed The Pin once they left Uni, developing a series of comedy shows at the Invisible Dot comedy club intended for the Edinburgh Festival Fringe, where they've enjoyed great critical acclaim.

Who's on the creative team?

The fun is directed by Emily Burns. It is written by and stars Ben Ashenden and Alex Owen, AKA The Pin. Set and Costume Design is by Rosanna Vize, Lighting Design by Prema Mehta, and Sound Design and Music by Giles Thomas. No wonder the reviews are all looking so good. According to the Sunday Times, “this absurdist deconstruction of the sketch show is masterful”. The Guardian says it's a “ bulletproof nugget of comic theatre”. We haven't seen a bad review yet, and we're not likely to. This really is comedy gold of the finest order.

What does Sonia Friedman say?

Sonia Friedman herself is genuinely excited about being back on stage after such a long break. In her words, “Following in the footsteps of Britain’s comedy greats – Morecambe and Wise, Fry and Laurie, French and Saunders – they are going to light up the West End with a combination of laugh-out-loud slapstick, self-aware silliness and witty wordplay in the most heart-warming story of two friends following their dreams. This genius comedy shows just how precious live performance is and, as British theatre begins to build itself back up, becoming a frontline of the national recovery, The Comeback couldn’t be more timely. Theatre isn’t just for Christmas. This is just the start.”

Covid secure measures within the theatre and social distancing seating are in operation. All seats have been organised into socially distanced groups of 1 to 6. All seats within each group must be purchased in full by one customer at the time of booking. In accordance with government guidelines, the auditorium has been organised into socially distant groups that are 1 metre apart in all directions. These must be purchased in full at the time of booking and can only comprise of single households, or a support bubble.