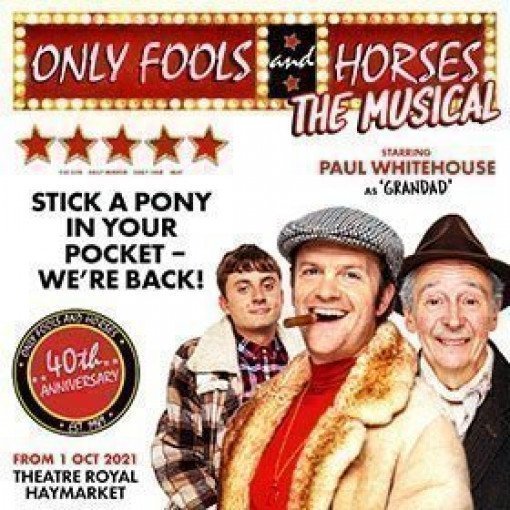 Only Fools and Horses the Musical description

Only Fools and Horses The Musical – Brilliant!

Most of the musical's score is brand new, 20 fresh tunes from the writers, who included the late Chas Hodges from the band Chas and Dave. There's a big, marvellous mash-up of two the tunes that marked the start and end of the TV show. All the old characters you love are there. It's written by Paul Whitehouse and John Sullivan, the son of the show's creator Jim Sullivan. It's Only Fools and Horses The Musical, and it's in the capital for February 2019.

Tony Angelino singing “cwying”. Del Boy falling through the bar. The chandelier scene, the broom gag and Batman and Robin costumes... oh, the TV series was so funny. How many of your favourite moments has Paul Whitehouse included in the musical version? You'll have to come and see. There's such a lot to get your laughing gear around.

TV's Only Fools and Horses made several generations giggle and remains one of Britain's favourite sitcoms. The three main original TV characters were played by Sir David Jason, Nicholas Lyndhurst and Lennard Pearce. For this new stage musical Paul Whitehouse plays the part of Grandad, included because he was thought to be a more sympathetic character than Uncle Albert, who joined the TV show later. Tom Bennett plays Del Boy and Ryan Hutton plays Rodney. It also stars old favourite characters Boycie, Trigger, Marlene and Denzil.

This great fun, hugely entertaining musical combines classic scenes from the TV show with new material and fresh jokes, but it remains faithful to the original and has been fully endorsed by Jim Sullivan's Estate. The action is set in Peckham during 1989, Del and Rodney are truly, madly and deeply in love with Raquel and Cassandra, and their world is changing fast. Expect a show that feels just like it did on telly but includes contemporary issues too.

The extraordinary popularity of Only Fools and Horses is brought to you by the Theatre Royal Haymarket, and it's being billed as several laughs a minute. Maybe more! If you're up for some classic sitcom fun with music attached, walk this way.

Only Fools and Horses the Musical video