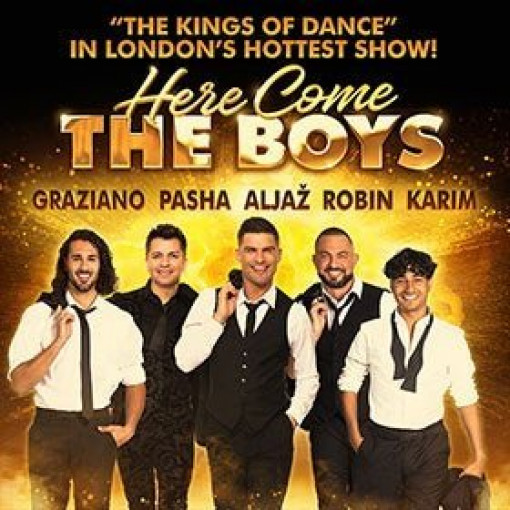 Are you one of the ten million Brits who tune into Strictly Come Dancing on Saturdays? If so you'll adore this fast-paced thriller of a dance show. The fun and drama is directed and choreographed by Gareth Walker and the West End 2021 run follows a sell-out UK tour.

Here Come The Boys features four rocking superstar Kings of Dance and a fresh new supporting cast in a brilliant new production. It's due to transfer to the West End for a 16 week season at the magnificent Garrick Theatre from late January 2021. If you love dance, this one's for you.

Here Come The Boys sees Strictly superstar Aljaž Škorjanec battling against the amazing Graziano di Prima, Pasha Kovalev and Robin Windsor to become the undisputed King of the Dance. CBBC's Karim hosts the show and also throws in some epic dance moves of his own, proving what a talented a dancer he is.

This isn't so much a story as a dance extravaganza, a non-stop fast and furious show packed with astonishing talent and fabulous music, everything from club hits to soul, disco and pop tunes, and every one a classic. You won't be able to sit still in your seat. The temptation to join the dance is strong, and you'll find yourself singing along as well as cheering for your own favourite King of the Dance.

Last year’s sold-out show and a smash hit West End run mean this new production is already attracting plenty of attention. Here Come the Boys features dance experts Aljaž Škorjanec, Pasha Kovalev, Robin Windsor and Graziano Di Prima, all of whom create magic through almost every genre of dance. They're joined by a e a spectacular cast of international dancer stars plus a world champion beatboxer, a truly massive LED screen, and the ultimate in lavish production values. No wonder it's such hot stuff.

About the show – A 16 week run full of variety

If you love the thrill of the dance, the skill of the dancers and the boom of the music, this is your show. Book early and enjoy the first big dance extravaganza of the new year!