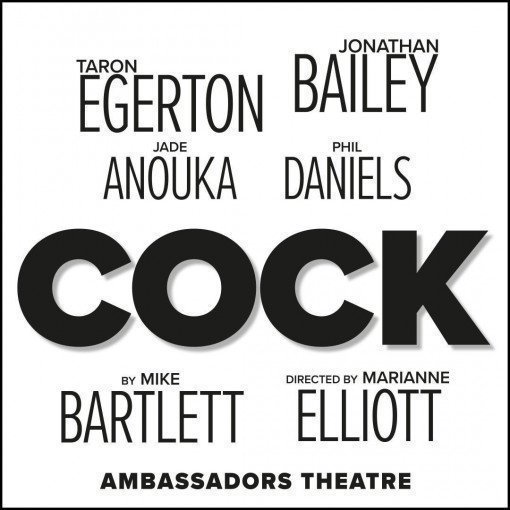 Welcome to Cock, Mike Bartlett’s 2009 masterpiece. It stars the Golden Globe Winner Taron Egerton, who is making his West End debut in the show. TV’s Bridgerton star Jonathan Bailey is back on the London stage, joined by Jade Anouka whose work on the BBC’s His Dark Materials and the Shakespeare Trilogy at the Donmar Warehouse thrilled huge audiences.

Phil Daniels also stars, an actor who has become a living legend thanks to key roles in Quadrophenia, Scum, The Class of Miss MacMichael, Breaking Glass, Meantime, Billy the Kid and the Green Baize Vampire, EastEnders, New Tricks, the Only Fools and Horses prequel Rock & Chips, plus countless other popular stage, film and TV roles. The play is directed by the talented Olivier and Tony Award winner Marianne Elliott.

What's the story behind Cock?

John is a happy chap. He’s happy being gay, happy in himself, and happy with his boyfriend. Then a luscious woman distracts him, the woman of his dreams. It just goes to show, there’s no need for us to be restricted by labels when the world is so full of endless possibilities. Who will end up broken hearted, and who will end up with John?

The Financial Times calls it “Mercilessly accurate, wickedly funny and strangely touching”. The Independent says it’s a “brilliant and blackly hilarious feat of provocation”. And fans of Bartlett’s extraordinary work are thrilled that this hard-hitting story – from one of Britain’s finest playwrights - is back on stage in the West End.

Famously sharp and witty, Cock originally premiered at London’s Royal Court Theatre Upstairs, starring Ben Wishaw, Andrew Scott, Katherine Parkinson and Paul Jesson. The play also appeared on stage at New York City’s Duke On 42nd Street during 2012. It was revived in the UK in 2018 by the Chichester Festival Theatre, and brought the house down at the Minerva Theatre, directed by Kate Hewitt.

The play has been described as sharp, witty, visceral, funny, anguished, crisp, hilarious, robust and ribald, featuring a ‘shattering climax’ worthy of Bartlett’s very best work. How can you resist!

Buy tickets for Cock from us and enjoy a simple, efficient experience. We'll email e-tickets conveniently to you, for you to present at the door of the theatre. You’re going to love this contemporary exploration of sexuality and how very fluid it can be.