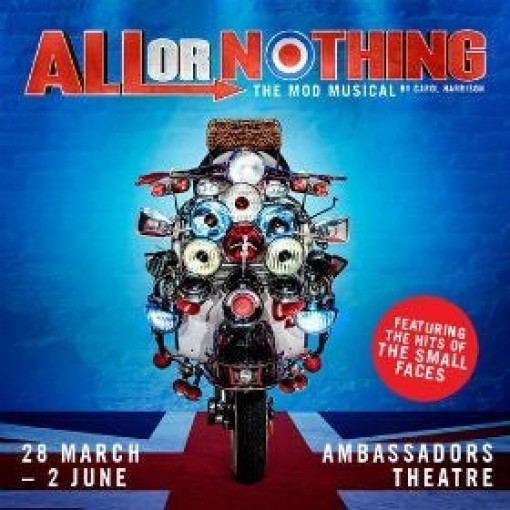 All or Nothing The Mod Musical

All or Nothing The Mod Musical description

From one West End theatre to another, All Or Nothing, affectionately known as the Mod musical, transfers from the Arts Theatre to Ambassadors Theatre from 28 March 2018. It previously completed a five-week sell-out run and promises the same of its nine-week schedule.

It’s 1965 and the East End has erupted with a new wave of cool, trendy style. It’s the essence of youth and alternative. It’s mod. It’s epitomised by Small Faces, a band that encapsulates the style, music and culture of the time.

All Or Nothing is a new jukebox musical, taking the music and lyrics from Small Faces hits such as Whatcha Gonna Do About It, Tin Soldier and Lazy Sunday and incorporates them into the book by Carol Harrison. Harrison is best known as playing Louise Raymond in Eastenders. The story follows Small Faces frontman Steve Marriott and his journey, played in this production by Chris Simmons. Simmons is best known for his role in The Bill as DC Mickey Webb. Harrison herself plays Kay Marriott, as well as directing the show.

Alongside the production, in true vintage style, a vinyl LP cast recording has been released, as well as the expected digital soundtrack all sung by the cast. The band is completed by Stefan Edwards, Stanton Wright and Ian McLagan.

All or Nothing The Mod Musical cheap tickets

All or Nothing The Mod Musical news